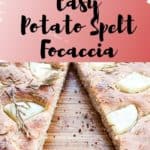 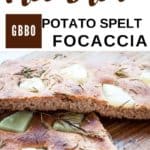 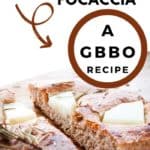 This Easy Potato Focaccia Bread Recipe looks pretty fab, and tastes EVEN better. Thick and crusty, with slices of potato on top mixed with rosemary sprigs. It makes the perfect slice for dipping in a thick marinara sauce or tucked in a bowl of fresh soup.

This is NOT a gluten-free focaccia bread recipe. While a lot people believe that Spelt is gluten-free I’m here to burst their bubble, it’s not safe for celiacs. While it’s not technically wheat it’s very similar and comes from the same family.

Spelt is one of the old grains that’s been around for a long time. It looks like wheat and has gluten, but its got a tough outer shell that protects the nutrients. It’s nutty in flavor and makes a hearty loaf of bread when you aren’t allowed to use wheat. Wheat has been a modern bread-making favorite but good old spelt never gave it up.

You can sometimes use Spelt for someone who may not be a celiac but needs a grain that doesn’t cause inflammation. Be sure to check with friends or family before feeding it to them.

Which is what happened in Collection 2 of The Great British Baking Show in the quarter-finals. The directive for the Signature was to make a loaf of bread that didn’t contain wheat. And that’s what our GBBO Bake-Along Bake is for the week!

Beca made a Potato Spelt Focaccia that looked amazing. She used spelt has her grain of choice, added mashed potatoes, AND some of the potato water for the liquid. I mean YES PLEASE, bread with potatoes in it and on it?! My teen was in heaven when I tested this recipe.

Where to get Spelt Flour

I found it at a local grocery store, local to Alaska, Three Bears, in their small but might natural foods area. I did look at the local Kroger, in the natural foods sections, and I didn’t see it there. You can buy it online here’s a Bob’s Red Mill 4 pack on Amazon.

About the potatoes in this recipe

The original recipe called for Maris Piper potatoes which we don’t have here. These were used for the mashed potatoes portion of the recipe. Research told me that we don’t get those in the United States. So I subbed in Yukon Gold, and they worked perfectly.

I ALSO use them on top of the bread as the potato slices. The original recipe on PBS Foods called for 15-20 new potatoes for the sliced potatoes on top of the bread. But looking at the actual photo of the bread Beca submitted, it didn’t have 30-40 slices of potatoes. So I used Yukon Gold and they were fine as well.

A couple of notes on this Potato Spelt Focaccia: